Are You Afraid Your Car Will Break Apart Because It Is Glued?

Did you know that on the average, every new vehicle manufactured today use about 27 pounds of adhesives or glue?

In the past ten years, according to The Wall Street Journal, car manufacturers only used about 17 pounds of glue or adhesives to hold the different car components together in much the same way as phones or airplanes and a plethora of other items. And not every driver knew about this.

Tougher Fuel Economy Standards
The old expression that a car seems held together with baling wire and glue is no longer just an adage. It is now a reality as automakers comply with the tough fuel economy standards requiring vehicles to be lighter in every possible way. And car manufacturers have to devise new assembly processes that make use of powerful glues in lieu of screws and welds.

Adhesives Used Since The 1960s
Adhesives have been used in cars and airplanes for the past 50 years or more. In the early 60s, cars had windshields were glued to their frames. GM introduced the minivans in the latter part of the 1980s with plastic body panels held to the steel frame using adhesives.

Increased Demand For Adhesives By Auto Makers
Today, aside from the standard GM cars, Cadillac ATS and CTS sedans also use adhesives to stiffen the car’s body so it won’t wobble. According to David Malik, director of advanced vehicle development of GM, car manufacturers are going to see structural adhesives across more and more vehicles. But a Ford researcher, John Hill who is responsible for adhesives said that he expects the adhesive content of vehicles to continue to rise. It’s not as if car makers are trying to glue an entire vehicle together.

There are certain parts of vehicles that still require the use of welds, screws and bolts. Where fastening of structural steel components require structural bolts, engine components of vehicles are typically held together by bolts and other metal fasteners because adhesives don’t perform well under high and extreme temperatures. 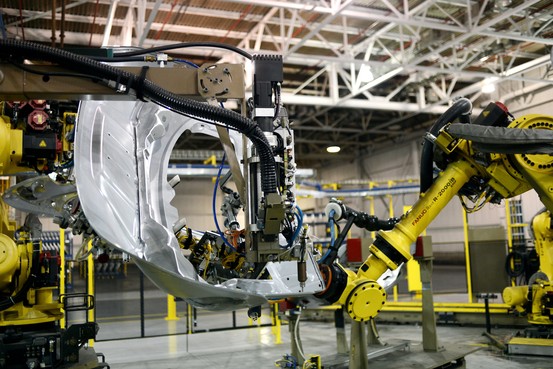 Robots apply adhesives to certain parts of the car.

Lighter Vehicles Made Possible By Adhesives
As auto makers try to keep the cars lighter by using thinner steel, they use adhesives to serve as a backing material that will stiffen the steel so that the cars won’t feel flimsy. In addition, noise is dampened by adhesives and rivets and welds are eliminated in areas where they would not look visually pleasant.

The latest Ford F-150 2015 model with a new aluminum body is said to require three times as many adhesives as the current pickup. The new electric-hybrid cars from BMW AG are manufactured with compartments made of carbon-fiber joined with adhesives and eliminated metal fasteners. In the same light, GM’s Corvette now comes with a roof made of carbon fiber that is glued to a magnesium frame.

Adhesives: Advantages
There are advantages in using adhesives and they include: 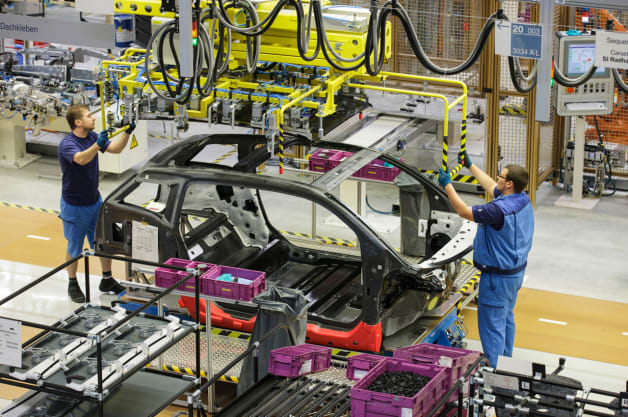 Car makers take advantage of using adhesives to join structural materials which can’t be welded together.

Adhesives: Disadvantages
Similarly, there are deemed disadvantages in using adhesives in car manufacturing, which include health risks to workers because of some harmful solvent or other substance content of adhesives; oily or dirty car parts or components can defeat adhesives; and adhesives can be so strong that dis-assembly can be complicated and difficult. But regardless, for car manufacturers, the new welding now is bonding with adhesives.

Is the car you’re driving a product of new welding?

I really had no idea that glue is used so widely to hold metal or aluminum or plastic parts together. When we think of automobiles, we just assume that the body of the car and the components are all held together with some super secure system of complex nuts and bolts. So yes, I do have some measure of concern with how prevalent glue has become in the construction of automobiles and other modes of conveyance, for that matter.

From Pritt stick in school bags to Audi sports cars, it seems to me that adhesives have come a long way since natural gums and resins, and new high-tech variations are currently top of the list for carmakers as they seek ways to make cars lighter and tougher. For auto suppliers like Henkel, PPG and Atlas Copco, providing tailor-made adhesives that can absorb the shock of a crash and reduce rattles allows them to push for higher prices – and make more profits.

Many parts on Audi’s R8 are held together by advanced structural adhesives which have also been developed to withstand racetrack vibrations and fierce heat. It seems that carmakers including Audi and Mercedes-Benz are turning to high-tech adhesives as they seek ways to make cars lighter and tougher. Automakers are now using more aluminum and exotic composites, which cannot be welded together but have to be glued with adhesives that will not lose their strength and can hold together parts even at top speeds and high pressure.