Every day, hundreds of thousands of planes take off and land, carrying as many as six million people to and from airports all over the world. The vast majority, by far, are conducted without incident.

That’s something to really be thankful for, considering just how much can go wrong when a plane is leaving and returning to a runway. It’s almost too easy to take for granted just how many complex and consistent procedures are needed to ensure safety, predictability, and efficiency. Most passengers are blissfully unaware of just how much goes on behind the scenes and how many systems are in place to prevent the worst from happening.

Aircraft rescue and firefighting (ARFF) resources are one of the best examples. Not to be confused with aerial firefighting, ARFF resources are dedicated to airport fire prevention and emergency response, and the evacuation and rescue of passengers and crew.

Preventing and fighting fires is a critical job in any situation, but add to it tens of thousands of gallons of jet fuel, moving at nearly 200 MPH, at every hour of the day, multiple times an hour, and airport firefighting is its own unique and intense type of emergency service.

ARFF duties are similar to firefighting units outside the aviation sector, but the procedures and equipment they need to prevent and respond to incidents are more specialized. In the United States, the FAA requires that ARFF services be in operation at all U.S. airports with scheduled passenger flights. 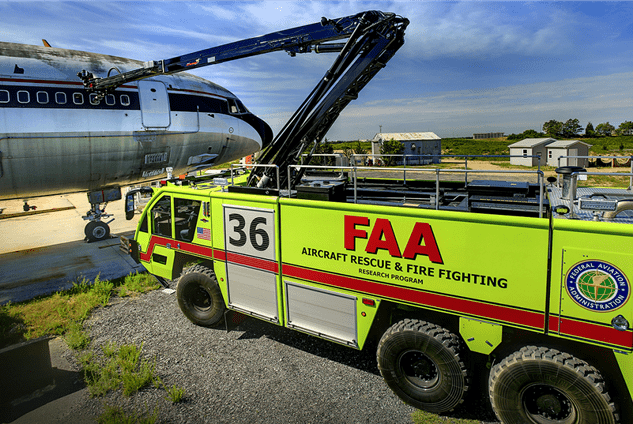 The U.S. military also maintains its own ARFF services at aircraft bases. Airport firefighter personnel are always present at these locations, but they typically have other duties while on-call, including luggage loading and security.

These professionals are specially trained to respond to the difficult challenges that come with an aircraft or airport fire incident, such as how to evacuate crew and passengers from a cabin while a jet fuel fire burns at 1000 degrees F on the tarmac nearby. They will also train to assess fire “behavior” in order to effectively extinguish burning aviation fuel using chemical agents.

To stay safe in these extremes, their protective equipment is comparably advanced. Called proximity suits, this type of outfitting is designed for protection against extreme radiant heat, consisting of fabrics that are coated in heat-reflecting materials.

Proximity suits are also equipped with self-contained respirators. Apart from extinguishing blazes and rescuing crew and passengers, aircraft firefighter units are also trained to deal with the higher casualty nature of aviation fire incidents, specifically by employing triage and other procedures that maximize survival.

An ARFF truck is also designed and equipped to deal with more extreme hazards and operational challenges.  In appearance, they can sometimes look more like tactical vehicles than conventional firetrucks.

They typically have extended water-carrying capacity, off-road and high-speed driving capabilities, and the ability to carry and discharge chemical extinguishing agents, including various dry chemicals and foams. Maintaining, maneuvering, and utilizing these vehicles is just another part of the ARFF job.

Fortunately, airport fires are rare, but this doesn’t mean that ARFF personnel can lapse in training and preparedness. Fire prevention and hazard mitigation is a regular job, with duties that include safety inspections to ensure all equipment is operational, properly handled, stored, and maintained.

Although propane is now used in place of jet fuel, ARFF training gives firefighters a chance to operate ARFF trucks, suit up in proximity gear, and run through various emergency scenarios.

Crews are then able to assess their performance and keep certifications current, thus ensuring that should the worst occur, they’re more than adequately prepared to respond. The FAA also used these simulations to test out new ARFF technology, equipment, and strategies.