The F 35 Joint Strike Fighter: Achieving Supremacy In All Aspects

Do you know what the new U.S. Jet Fighter is capable of doing which other fighter jets can’t?

The military, the manufacturer and everyone else involved in producing this giant aircraft call it the F-35 Joint Strike Fighter – a next-generation fighter jet billed as one that can do it all and the most advanced warplane of its type that has ever been developed in the history of the world. 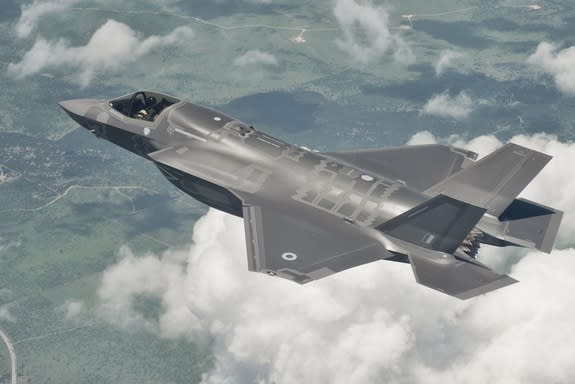 The Next-Generation Fighter Jet
In Fort Worth, Texas, Lockheed Martin is in the process of putting together this aircraft in a mile-long assembly line. The next-gen fighter jet is designed to be smarter, more capable, more flexible, and stealthier than any aircraft ever manufactured.

Its manufacturing process goes beyond choosing the best aircraft parts including the actuator systems with precision motor generators, or using high quality military grade titanium sheets, or the biggest capacity aircraft engines, etc. Why else are the American taxpayers paying close to $1 billion in manufacturing, research and other expenses – a month, if it was just an aircraft with ordinary features and was already in the market? The U. S. F35 Joint Strike Fighter may well be the most expensive aircraft in the world.

Building A Flying Computer
Lockheed Martin, who was awarded lead contractor by the Pentagon to build this “flying computer”, confirms that the F 35 will be flexible with whatever technology or software goes into it. For the US military and its allies buying the aircraft, such flexibility in technology and software are the backbone of air defense being counted on for the next 50 years.

Flying Computer – that’s how this giant aircraft is perceived.

First Combat-Ready Aircraft
Scheduled for delivery in 2015, the first combat-ready airplane is near completion of its series of testing. About 100 jets have already been built and are currently undergoing tests by the military. If things go as planned and expected, over 2,400 F 35′s will be seen flying for the U.S. military with allies buying hundreds more. The total estimated expenditure which would be spent in developing, buying and maintaining the F 35 program over the next 50 years will reach $1 trillion.

Many Firsts
The F 35 stealth jet has many firsts:

Other Features
Aside from its technological upgrade, other features of the F 35 include the plane’s ability to carry more but smaller, lighter bombs, thus allowing the plane to fly farther and hit more targets. It is also designed to be able to perform vertical landings like helicopters do – taking off and landing vertically, without the need to taxi through the runway. This aircraft has also created a new trend – that of bringing in international partners from the initial production phase up to completion. There are ten countries that have invested in and plan to buy the jet fighter. The US F35 Joint Striker Fighter jet has the capability to perform vertical landing and take off.

The Future Face Of Defense Industry
The F 35 fighter jet is designed to have the operational ability from a range of varied locations including aircraft carriers, airfields, and amphibious ships. According to Lockheed Martin, the jet can be used for surveillance and intelligence gathering.

Is the world ready for more F35s?

What an exciting, but massively expensive, project this is. When you think about the U.S. selling such powerful weaponized aircrafts to its allies, you cringe a bit at the thought that this jet fighter could end up in the hands of an aggressive non-ally. However, when you consider that the cost to develop a fleet of these is in the trillions of dollars, you realize that it is a necessary risk – the cost of doing business.

I’ve heard that the Pentagon’s newest stealth jet won’t be able to fire its gun during operational missions until 2019, three to four years after it becomes operational. Even though the Joint Strike Fighter, or F-35, is supposed to join frontline U.S. Marine Corps fighter squadrons next year and Air Force units in 2016, the jet’s software does not yet have the ability to shoot its 25mm cannon. But even when the jet will be able to shoot its gun, the F-35 barely carries enough ammunition to make the weapon useful.