The USDA and state agricultural departments in the Northeast are sending out warnings of an invasive and damaging pest. The spotted lanternfly, (Lycorma delicatula) is a planthopper insect that’s native to northern China.

When open, their spotted wings reveal striking patches of red. If they look like an exotic bug, there’s a good reason for that; up until 2014, they were not identified in the United States.

Since their detection in Berks County, PA less than a decade ago, they’ve become a significant concern for orchards, arbors, vineyards, plant nurseries, food growers, landscapers, and landowners. Why are lanternflies bad? Their ability to reproduce rapidly and thrive in a variety of habitats means their populations can become widespread and overwhelming in a short period. 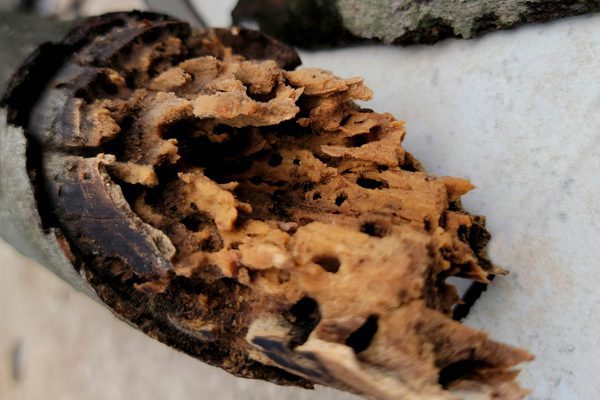 When they swarm, they can be a nuisance to anyone attempting to enjoy their time outdoors. They are an especially big problem because of their appetite for all types of vegetation, including fruit trees, shrubs, and other plants that are needed for food, lumber, and more. If allowed to proliferate, spotted lanternfly damage could add up to losses of hundreds of millions of dollars and thousands of jobs.

In and of themselves, spotted lanternflies are not a dangerous fly to humans. Neither the spotted lanternfly nymph nor adult has been known to bite humans. They have sap-sucking mouthparts that are used to penetrate plant stems and leaves, but they aren’t used typically used for defense. The most lanternflies will do to ward off predators is fan their wings and secrete a cytotoxin that isn’t likely to affect humans in any serious way. 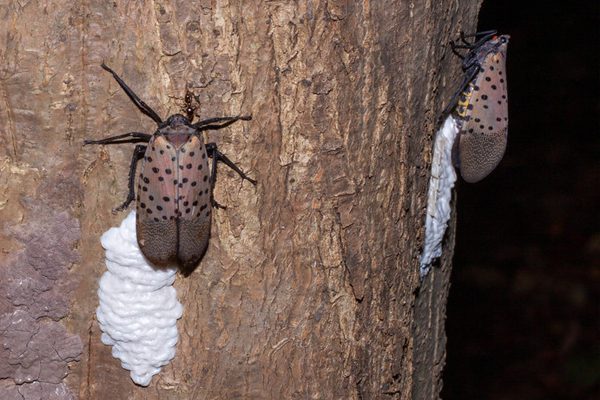 They also secrete sugary excrement known as honeydew, which isn’t dangerous but it does coat surfaces, creating a sticky mess and promoting the spread of mold. The greatest danger the spotted lanternfly poses is in its effect on host plants.

Lanternfly nymphs and adults feed sap in new plant growth. This interferes with photosynthesis, hindering the plant’s ability to convert sunlight into energy, which impedes growth and can cause the plant to die. 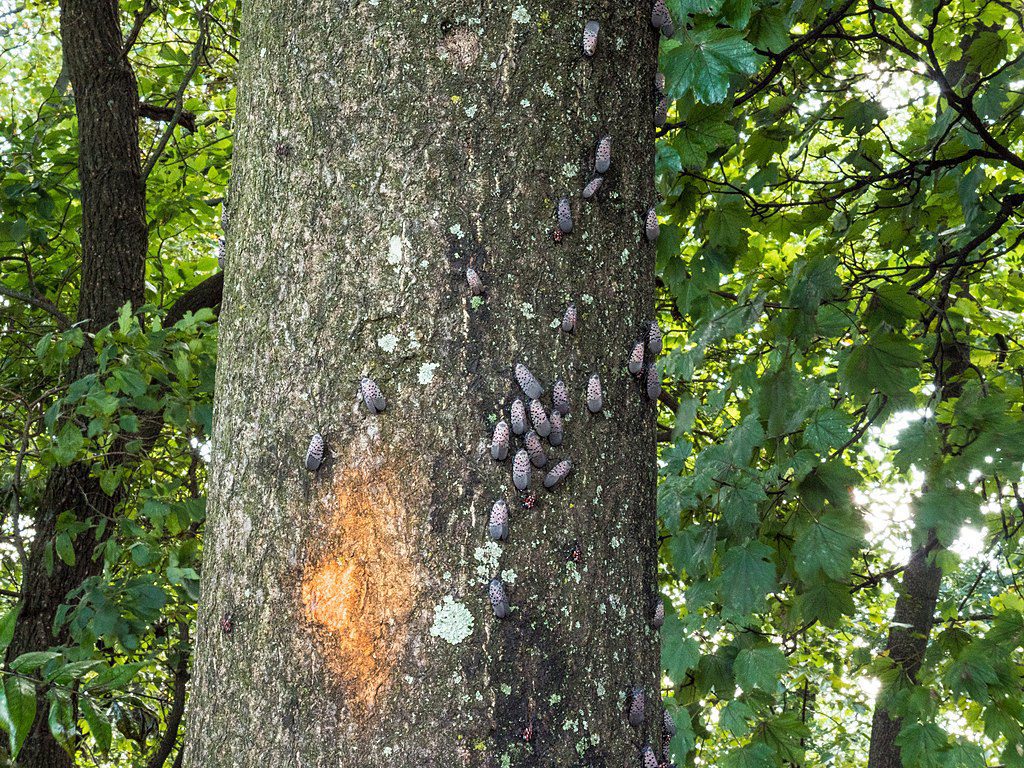 Further damage occurs when honeydew left behind by feeding lanternflies encourages the growth of sooty mold, which also blocks leaves from getting the sunlight they need. Spotted lanternfly tree damage and infestations can seriously hinder fruit and leaf production. If allowed to progress, they can take down whole plants in a short time.

A single spotted lanternfly is able to lay between 30 and 50 eggs, which are gathered in egg masses. Once a population is established, multiple plants can be infested fast. Although they’re not great flyers, they can still swarm and move from one area to another.

Just a single egg deposit or fertile adult, unwittingly transported through a produce shipment or transplant of saplings, can cause devastating effects. In less than ten years, a small population in Pennsylvania has grown to multiple states. 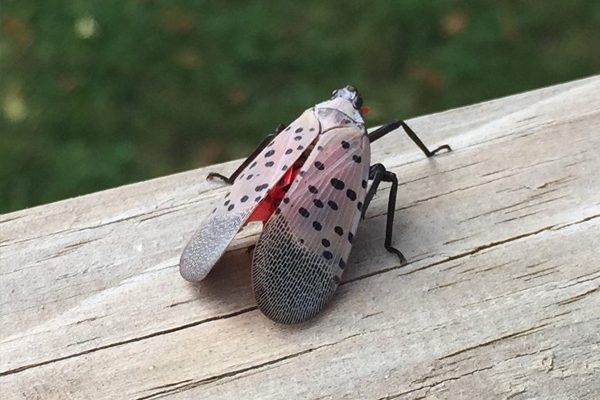 How To Get Rid Of Spotted Lanternfly

Controlling and eliminating the spread of these pests will require a proactive approach. Officials in affected areas have been designating quarantine sites and striving to raise public awareness.

Citizens have been encouraged to not only report sightings but start killing lanternflies and remove spotted lanternfly eggs when they’re encountered. Adults and nymphs can be destroyed with minimal force.

Since they pose no immediate threat to humans, simply squashing the insect has been advised. Spraying insects with white vinegar is another efficient control method. To be really impactful, it’s necessary to kill populations at all stages in the spotted lanternfly life cycle. Egg clusters should be completely scraped away and placed in a sealable bag or container with alcohol. 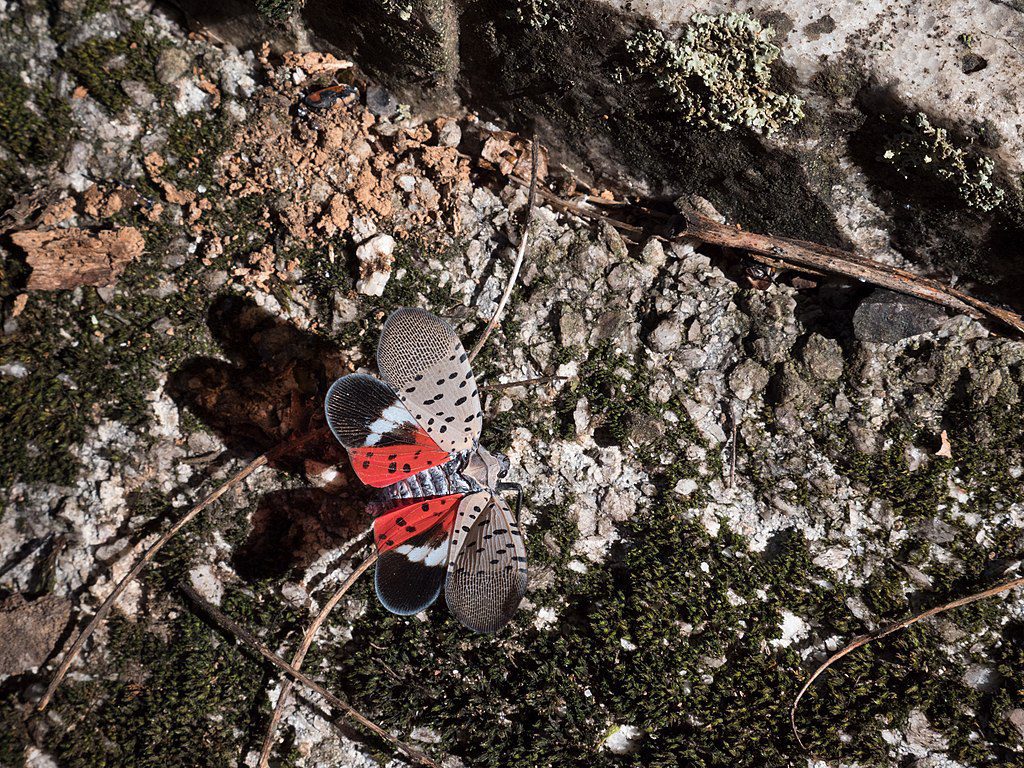 If removing the cluster isn’t possible, coating egg masses with mineral oil is also effective. Using insecticides for widespread control has not been recommended as this can adversely affect beneficial insects, including potential lanternfly predators like spiders and wheel bugs. Researchers are still investigating biological control that does not require harmful chemicals or the introduction of non-native predators.

Presently, manually destroying insects, removing egg masses, and the use of safe and natural repellents like white vinegar, lavender oil, and linalool oil are recommended.