Where can you find a structure that sweetly exemplifies the seamless integration of technology, architecture, and acoustics?

In Stanford, California, the 842-seat, state-of-the-art Bing Concert Hall at the Stanford University was built to cater to a wide array of music performances ranging from full-sized orchestras to even small chamber ensembles, multi-media, jazz, world music, and newly-commissioned work. The Bing Concert Hall At Stanford University
The overall objective of the design of Stanford University’s Bing Concert Hall is to transform the study, practice and experience of the performing arts at the university. The concert hall plays home to the University’s Music Department and Stanford Live, with a state-of-the-art venue for visiting student artists, world-class performers and musicians. The building integrates curriculum and performance for students while engaging the community of the Bay Area.

Vineyard-Style Concert Hall
The central element of the building is the 842-seat vineyard-style concert hall which includes:

The concert hall occupies an oval drum within an irregularly-shaped lobby. A generously-spaced forecourt plaza located in the west side of the building welcomes and leads patrons to the entry portico and into the lobby.

Lobby: Transitional Space
The lobby serves as the transitional space between the verdant planted surroundings and the inward-focused concert hall.  The lobby enjoys natural lighting from all sides and light wells are strategically placed around the drum. The 19 ft. high-glass and aluminum curtail wall provides the connection between the interior and the exterior. Opening the façade to the exterior colonnades are full height sliding sections of the curtain wall – a distinct expression of traditional Stanford typology.

The irregularly-shaped lobby serves as the transitional space between the lush surroundings outside and the inward-focused concert hall.

The Unique Design Of The Concert Hall
The concert hall, nestled within a 12-inch thick concrete enclosure, meets the highest acoustical standards and acoustically isolated from outside sounds and noise. Every seat in the house is designed for optimal acoustics.

The farthest seat is only 75 feet from the orchestra conductor. A terraced-seating complements the vineyard style configuration, creating an intimate concert experience and a warm, rich environment for the performers and the audience.

Each seating section is embraced by low walls, angled and articulated with beech wood, especially chosen for its specific density and textured surface that disperse and reflect sound. Six moving platforms, each sitting on a vibration isolation platform, built from yellow Alaskan cedar chosen for its acoustical properties and softness make up the concert hall stage.

Sail Walls And Ceiling Cloud
A distinct design that contrasts the material quality of the hall’s patron and performer level features ceiling cloud and sail walls, creating an uplifting effect with its lighter tones. Surrounding the seating and defining the hall’s volume is the large, convex-shaped sails that function as acoustic reflectors carefully shaped and angled to achieve optimal acoustic absorption or reflection. Another function of the sails becomes evident when the sails are used as screens for video projection. 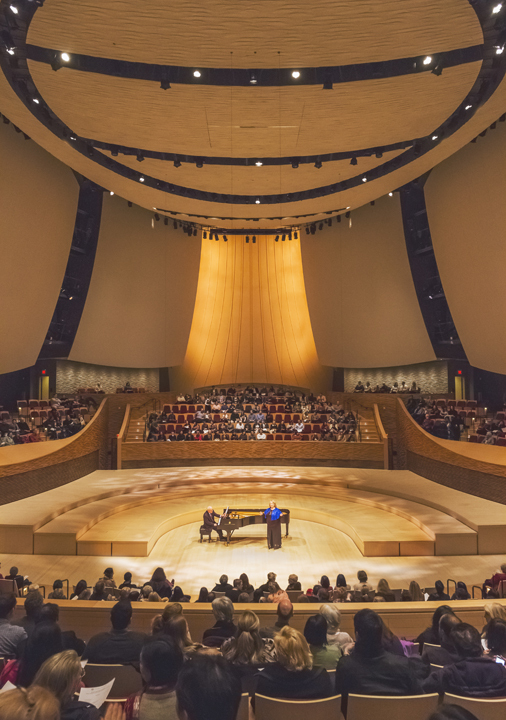 Ceiling Reflector
A double-curved ceiling reflector floats 47 ft. above the stage, which also contains and carefully camouflages most of the rigging and sound equipment and technical lighting. The surface articulation of all the wall and ceiling reflectors assists in sound deflection. When performances require amplified sound, variable acoustic curtains between the sails fine-tune the room to provide and fulfill the acoustic properties required.

Stanford’s Commitment To Arts
For Stanford University, the $111.9 million Bing Concert Hall underscores its commitment to the arts which started with the Arts Initiative – an effort throughout the university to integrate arts and creativity into every field of learning. According to Stanford’s assistant vice president for the arts, Kären Nagy, the Bing Concert Hall is a lasting embodiment of what the Arts Initiative has been about. The hall is a vibrant and dynamic way to expose all Stanford students to the arts, as the university allows all students to experience the performing arts at an unrivaled level, ultimately bringing a new sense and level of professionalism to their own performance practice.

Do you know of other concert halls that are optimally-designed for acoustic excellence?

This music hall looks very much state of the art. I bet the acoustics are superb. Every section of this hall must have been meticulously planned to utilize the principles of acoustics. If I am ever in California, I’ll look into the schedule of this place to see if I can attend an event that may be open to the general public.