Electric Vehicles can do more than move people from A to B; they can serve as home generators during power outages. During the massive power loss emergency that afflicted Texas this winter, owners of the hybrid Ford F-150 truck were delighted to plug home appliances, furnace blowers, and even televisions into the truck’s built-in 7.2-kilowatt onboard generator. In fact, electric vehicles look like they will play a vital role in home energy and grid management. Montreal-based Dcbel is bringing to market later this year its r16 unit that enables bi-directional power flow between an EV, home, rooftop solar array, and the grid.

The r16 hardware is mounted in a garage and manages power inputs and outputs for an EV, the home, the grid, and rooftop solar panels if present. The r16 accepts DC power coming from solar panels. EVs charge more quickly with DC power. An r16 can also optimize EV charging from the grid. Peak power pricing raises consumer electricity prices during high demand, and the r16 can charge the EV when prices decrease during low demand. Additionally, a homeowner may avoid costly grid power during peak pricing and draw stored power from the EV battery through the r16. 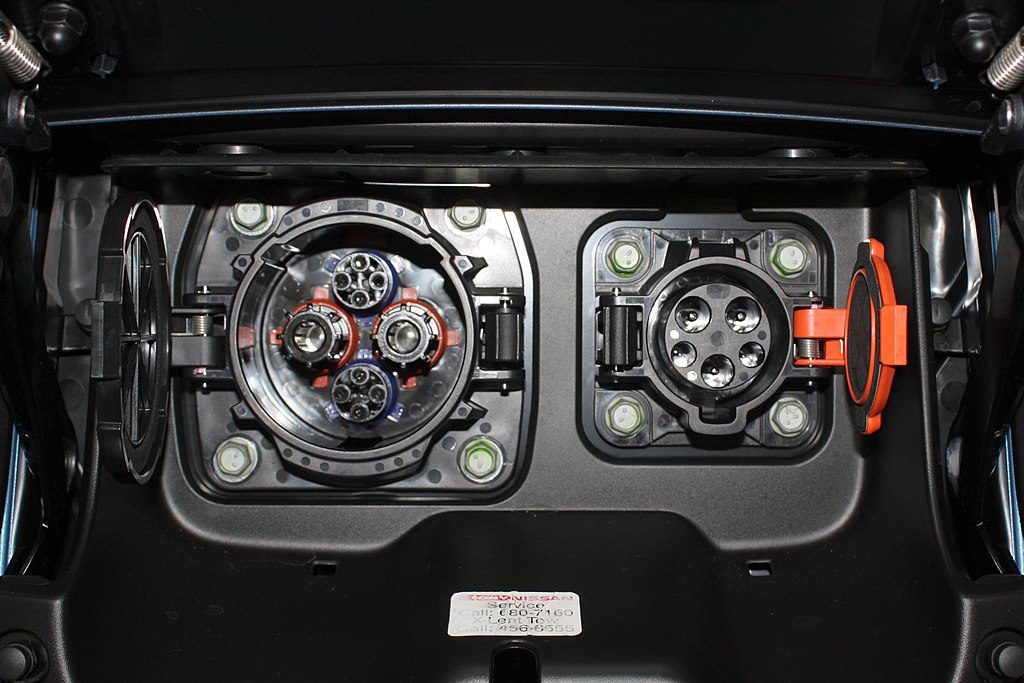 Close-up photograph of the charging sockets on a 2012 Nissan Leaf. Credit: Musashi1600

At this time, the Nissan Leaf and the Mitsubishi Outlander are the EV models equipped to handle bi-directional energy flow. Dcbel anticipates more EV models will be designed to take advantage of power management among an EV, home, and the grid.

In California, where peak electricity demand can cause rolling blackouts, the utility PG&E has been exploring the potential of EVs as backup power. Since 2015, the utility has worked with automaker BMW to test EVs as backup power units in homes. Potentially, the utility will partner with customers in the future to use power stored in EVs to relieve strain on the grid during high-demand events. 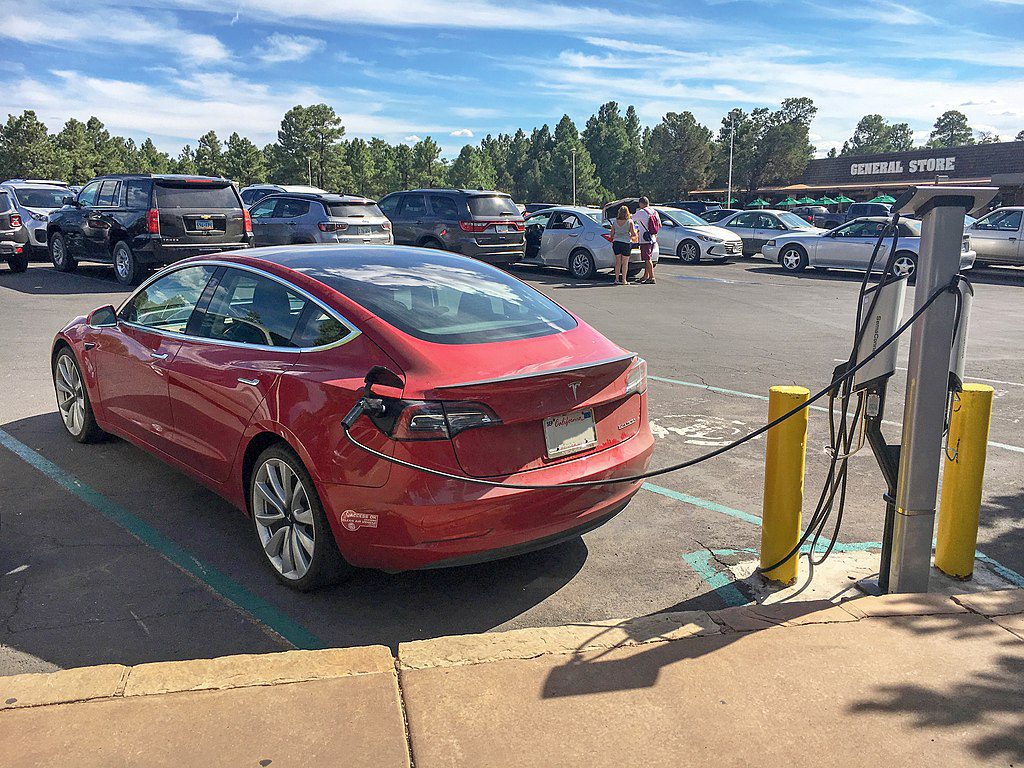 dcbel™ r16 is not just the most powerful solar inverter or fastest residential bidirectional EV charger available, it is the first smart home & EV energy appliance.  dcbel™ r16 serves as a home’s smart energy controller, adapts to your habits, and provides optimized, autonomous & clean power when you need it.

We built dcbel™ r16 to optimize your space and energy consumption.  During a blackout, dcbel™ r16 powers your home with your EV.  Get the ultimate energy solution for your home, car and solar energy management.

The Nissan LEAF is an all-electric vehicle, its motor doesn’t require gas at all. It’s not a hybrid — instead it gets the energy it needs to drive the electric motor between its front wheels from the large lithium-ion battery mounted along the floor of the car. Charging is as simple as charging your cell phone: plug it in, and let it go.

Owning a Nissan LEAF keeps getting better with numerous benefits to going electric beyond lower cost of ownership. You’ll never have to stop for gas again, so forget the pump and stop worrying about the price of gas. And depending on where you live, you may qualify for potential state and Federal tax incentives, HOV lane access, and more

PHEV has plenty of options for charging. Head to your nearest DC Fast Charging station and charge your PHEV to 80% in about 25 minutes — time for you to stop and grab a coffee. Visit a level two public station to reach full power in less than four hours. More time on your hands? Plug into a standard 120V outlet at home to charge your battery in less than 8 hours, or reach full capacity in half the time, with a professionally installed 240V charging station.

The magic under the hood that makes everything tick, this smart system automatically switches between drive modes to optimize performance. PHEV runs on electric power until it absolutely, positively, has to use gas.  Outlander PHEV boasts an exceptional 74 MPGe2 combined energy consumption and automatically cycles between one of three driving modes to help you drive more efficiently.

The United States is a major global presence in wind energy but only with land-based wind turbines. The country only has two small offshore wind installations by Virginia and Rhode Island totaling only seven wind turbines and generating 42 megawatts. 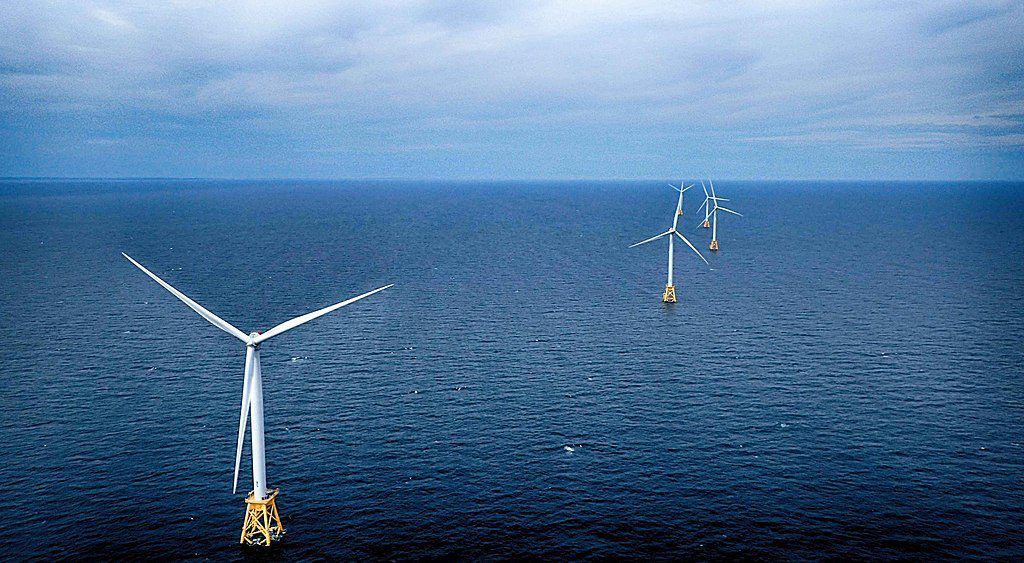 The Atlantic Coast of the Eastern United States has a relatively shallow continental shelf suitable for building offshore wind farms. States in that region see offshore wind as their best option for generating clean energy to serve a dense population along the coast.

The U.S. Department of the Interior will expedite reviews of 16 proposed offshore projects already seeking leases for coastal construction. The Interior Department is also working to designate the best wind energy areas on the East Coast.

The U.S. Department of Transportation will offer $200 million in grants related to building port facilities so that they can accommodate offshore wind installation and maintenance. At the National Oceanic and Atmospheric Administration, scientists are developing the process for sharing data about ocean conditions and marine wildlife to facilitate offshore developments and avoid environmental problems that could interfere with permit approvals. 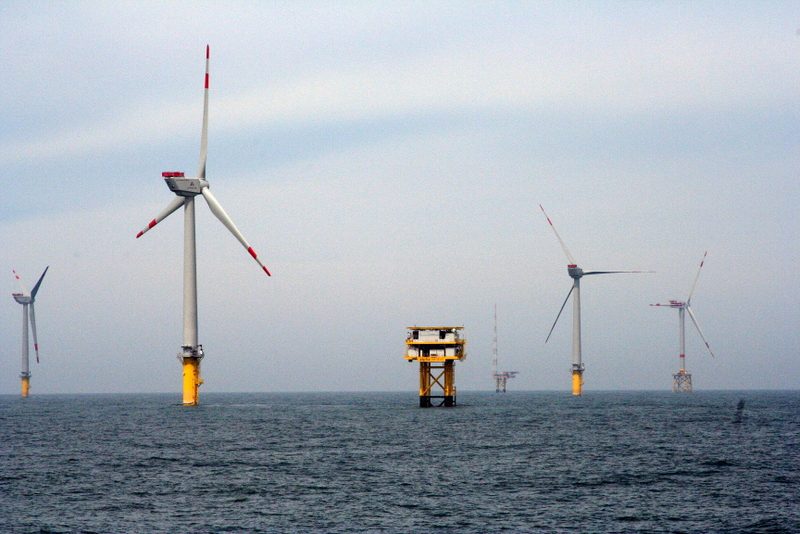 ABOUT The U.S. Department Of Interior

In 1789 Congress created three Executive Departments: Foreign Affairs (later in the same year renamed State), Treasury, and War. It also provided for an Attorney General and a Postmaster General. Domestic matters were apportioned by Congress among these departments.

The idea of setting up a separate department to handle domestic matters was put forward on numerous occasions. It wasn’t until March 3, 1849, the last day of the 30th Congress, that a bill was passed to create the Department of the Interior to take charge of the Nation’s internal affairs.

ABOUT The U.S. Department Of Transportation

The Department of Transportation was established by an act of Congress on October 15, 1966. The Department’s first official day of operation was April 1, 1967.

The top priorities at DOT are to keep the traveling public safe and secure, increase their mobility, and have our transportation system contribute to the nation’s economic growth.

DOT employs almost 55,000 people across the country, in the Office of the Secretary of Transportation (OST) and its operating administrations and bureaus, each with its own management and organizational structure.

NOAA is an agency of the U.S. government that enriches life through science. Our reach goes from the surface of the sun to the depths of the ocean floor as we work to keep the public informed of the changing environment around them.

Researchers See Tidal Energy As The Wave Of The Future

Anyone who has ever watched an ocean’s waves crash endlessly against a beach has witnessed a continuous source of power. In the realm of renewable energy, ocean wave power has proven elusive to harness and expensive to research. However, the potential for clean energy and economic development continues to entice private and public investors in the United Kingdom and United States.

Experimental Systems In The Orkney Islands Ready For Next Step

For 20 years, researchers have managed wave power test sites throughout the Orkney Islands off Scotland’s coast. Orbital Marine Power now says that its tidal stream system can advance to large-scale applications. The company plans to install a wave turbine this year that will produce enough electricity for 1,700 homes. Multiple marine power companies have plans to build marine energy farms around the U.K. in the near future. 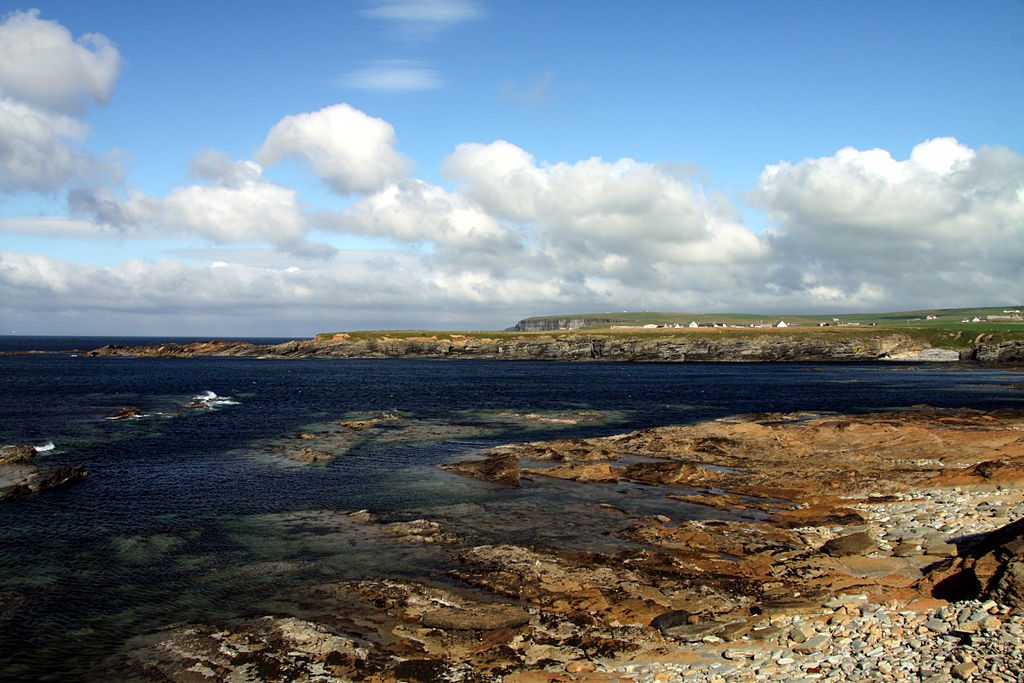 Tidal Power Shows The Most Promise

Wave energy near coastlines is inconsistent. Sometimes it is forceful, and other times it is calm. Tides, however, move with much more consistency due to their relationship with the moon’s gravity and the Earth’s rotation. The consistent energy provided by tidal stream energy can provide a reliable backup for wind and solar energy.

To find the best tidal currents for energy harvest, scientists have started deploying drones to locate and measure tidal currents. This approach costs less money and gathers data quickly compared to sending costly ships and crews out to sea.

In the United States, the PacWave project from the Oregon State University has received a lease from the federal government to build an experimental system 7 miles off the coast. The Oregon coast experiences strong waves and provides a strenuous testing ground for wave energy generators.

Because wave energy could power coastal cities in the future, it could revitalize coastal industrial centers that previously relied on fossil fuels. Do you think that ocean wave energy will eventually play a primary role in meeting global energy needs?

Everyone at Orbital Marine Power shares the same motivations. We want to play our part in tackling climate change, improving air quality and supporting the global transition away from fossil fuels.  Orbital Marine Power is a privately held company with offices in Orkney and Edinburgh.

Orbital’s unique floating platform is moored via anchors in powerful tidal streams or river currents. Underwater rotors capture the dense flowing energy.  We are passionate about our technology, and about evolving it, so that we can reach more people, communities and businesses with lower-cost clean energy.

That’s our goal and our vision.

Pacwave is a globally recognized, open-ocean wave energy test facility based at Oregon State University in Corvallis, Oregon. It consists of two test sites, Pacwave North and South, located in close proximity to the deep-water commercial port of Newport, Oregon. Pacwave is affiliated with the Pacific Marine Energy Center – a consortium of universities focused on the responsible advancement of marine energy, including wave, tidal, riverine, and offshore wind resources.

Approximately one-third of the US annual electricity usage could potentially be generated from waves and tidal currents, and 80% of that is estimated to be along the outer continental shelf. Ocean waves are relatively constant and are increasingly predictable.

The latest research results for developers of perovskite photovoltaic cells have excited renewable energy experts. The cells contain perovskite compounds layered on electrodes, and 2021 could be the year that sees them enter commercial uses due to their high efficiency and flexibility of application.

Silicon has been at the heart of photovoltaics for years. Silicon solar cells have thus far achieved a 26.7 percent rate of light to energy conversion. Tests of the upcoming perovskite cells made by Oxford PV showed that they produced a 29.52 percent conversion rate. Oxford PV plans to install commercial modules this year that will perform with at least 27 percent efficiency. 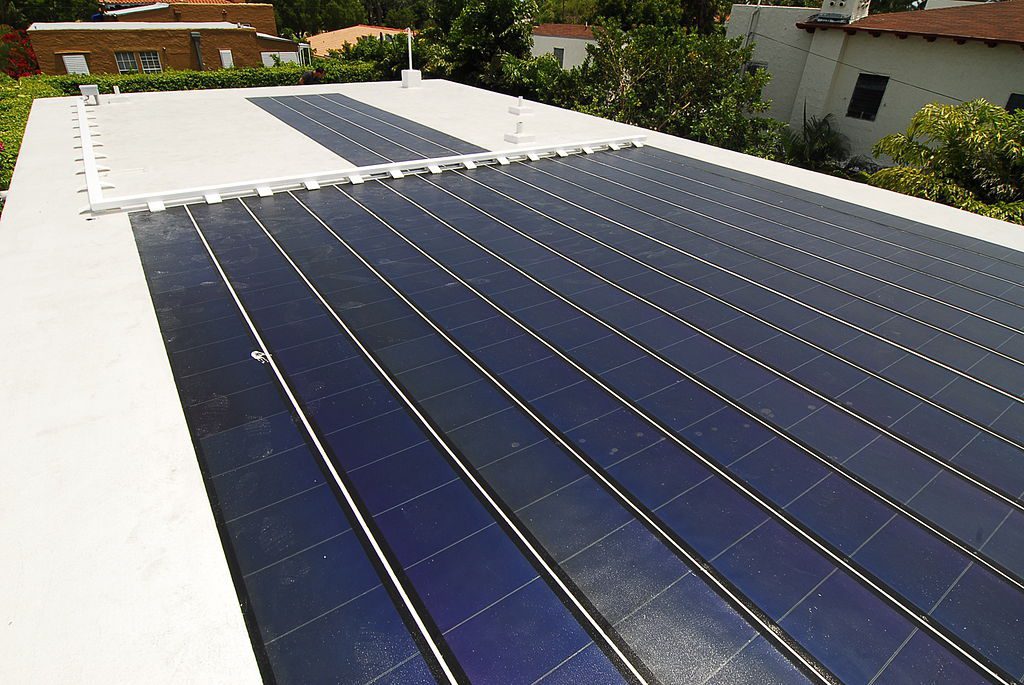 Another research group has made perovskite cells that enhance electron injection with cesium-titanium nanotubes. The cesium improves the transport of electrons, which increases power conversion. The researchers said that the cesium application process was a relatively low-cost method for achieving superior cell performance.

The layers in a perovskite cell can be as thin as 10 to 50 nanometers. The cells make electricity by harvesting electrons between the layers. The electron transport is very efficient and results in minimal loss. 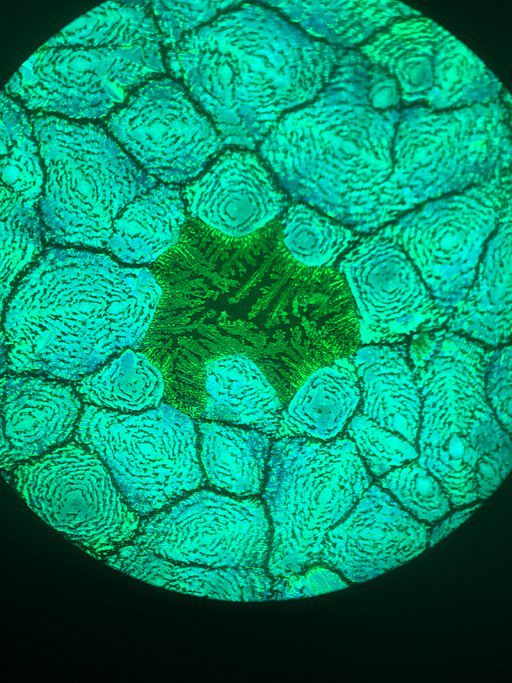 The ultra-thin structure opens the door to adding solar energy collection capabilities to more objects and buildings. Producing the perovskite cells will cost less than the manufacture of silicon cells. They can be printed onto a flexible plastic base. In the near future, perovskite solar cells could cover the top of vehicles, walls, and bridges.

What role do you think solar power will play in controlling future energy costs for manufacturing plants?

Oxford PVTM™ – The Perovskite Company™ is the pioneer and technology leader in the field of perovskite solar cells.

The company was established in 2010, as a spin-out from the University of Oxford. Today, we have the largest team globally, exclusively focused on developing and commercializing a perovskite-based solar technology. We have a research and development site in Oxford, UK and an industrial site near Berlin, Germany. We are building the world’s first volume manufacturing line for perovskite-on-silicon tandem solar cells.