The vast majority of Americans have electric power carried to their homes through aerial cables supported by utility poles and pylons. There are quite a few advantages to this system.

Wires are kept out of the way of most ground structures and activities, but they can still be accessed when maintenance, management, and updates are required.

Aerial power lines are also easy to identify and account for when building new structures or managing infrastructure. And, for the most part, this system has proven to be fairly reliable and adaptive considering just how much power and connectivity needs have increased.

However, overhead power lines have their vulnerabilities and disadvantages. They’re also not the only option for connecting communities to electric grids and communication networks. Buried power lines, or power line undergrounding, are a viable alternative. Underground power lines are common in parts of the UK, the Netherlands, Germany, and Japan. 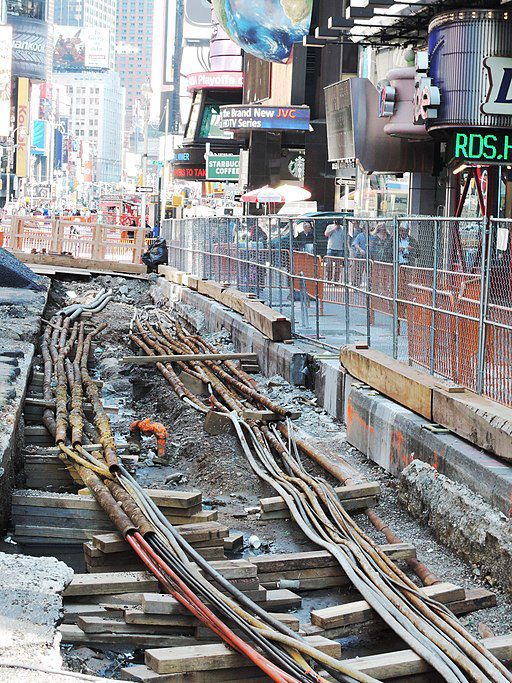 New York City is also one of the more notable examples where utilities are mainly run under cement and asphalt. Some other parts of the United States, including San Antonio, TX; Colorado Springs, CO; Williamsburg, VA; Tacoma, WA, and others have also begun adopting underground wire systems for future utility projects.

There are many advantages to buried electric wire and cable lines. This includes obvious scenic advantages, but more so in the reduction of fire and safety hazards, tree trimming and other maintenance requirements, and power outages due to downed lines and environmental extremes. But putting power lines underground carries some special considerations.

Through most of the 1900s, underground power lines used some form of added material insulation to protect the high-voltage wires. This included rigid piping, pressurized paper, rubber, and PVC in the earlier half of the 20th century.

Soon, direct-buried cable bypassed these covering requirements. This type of electric cable is specially designed to resist the effects of extreme temperature, moisture, punctures, and soil acidity that can damage underground power lines. It also thoroughly insulates the flow of electricity to prevent unwanted conductivity.

Direct-buried power lines and communications cables are covered in multiple layers of sheathing, heavy rubber, shock-absorbing gel, and waterproof tape. Although it’s highly resistant, there is still some risk of damage or cutting if the ground is unwittingly dug up during excavations.

For this reason, underground electric wire networks are generally kept off main infrastructure routes and instead directed through side roads and sparsely developed areas.

When laying underground wire, placement methods include horizontal boring, which requires only minimal disruption to surfaces; trench undergrounding, in which trenches are dug to lay power lines; and duct banks, which lay wires through pre-made sections of concrete and conduit that are then placed in a trench.

Although these methods can be used in a variety of settings, thus allowing cities and towns to gain the many benefits of underground cables, there are still some limitations and disadvantages to this system.

Despite their aesthetic, safety, and resilience advantages, some issues stand in the way of adopting and maintaining an underground utility system. The cost to bury power lines in developed areas is one of the most significant obstacles.

Compared to overhead systems, undergrounding can add up to several times the installation cost and up to four times the life-cycle expense and maintenance, though this does not factor the costs saved through reduced power outages.

Underground power lines can pose some hazards if they’re not accounted for during excavation and digging projects. They also may not be practical in especially rocky or earthquake-prone areas.

Even with these and other limitations, buried power lines are increasingly seen as a wise investment in some regions, mainly due to the vulnerability of utility infrastructure as extreme weather events, rising average temperatures, and power demands continue to strain existing power line networks.