How is an electromagnetic (EM) railgun important in U.S. naval combat? 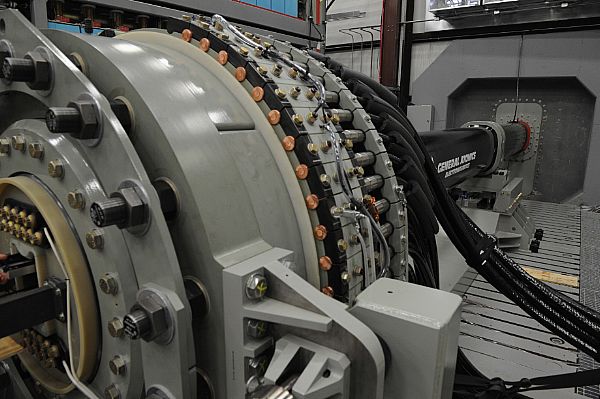 A news release from the Command Office of the Naval Sea Systems announced the planned installation and testing of a prototype electromagnetic (EM) railgun aboard a high-speed naval vessel, by 2016. Such testing will mark an EM railgun being tested and demonstrated at sea for the first time. This symbolizes a significant naval combat advancement.

EM Railgun Technology
The technology behind the EM railgun is the use of Lorenz Force, an electromagnetic force that allows two conductive rails to be fired at a projectile at speeds reaching 5,600 mph, outperforming conventional weapons.

High-velocity launching of the guided projectile will allow the U.S. Navy to achieve far-reaching ranges compared to conventional guns. Sufficient kinetic energy is maintained so that it doesn’t need a high explosive payload of any kind to reach a target.

Energetic Weapons
The high-energy EM railguns are designed to be lethal and effective against multiple threats. These threats include:

Cost-Effective And Technology-Backed Offensive Facility
A new and cost-effective offensive capability for the U.S. Navy is now a reality because of the EM railguns. According to the Chief Engineer of the U.S. Navy, such technology will allow the Navy to respond to a wide array of possible attacks effectively, at a much lower cost than using traditional missile ammunition. Railgun projectile costs about $25,000 compared to $500,000 to $1.5 million for a missile.

The initial development of EM railgun technology through 2011 had cost the US Navy some $250 million and estimates about the same amount required for the EM railgun to be fielded.

The Future of Naval Combat
EM railguns have deemed the future of naval combat. The U.S. Navy is moving along with the changing times by being at the forefront of technology. Apart from improving their naval fleet – by doing some needed enhancements such as the installation of marine engine mounts to control the noise and vibration coming from the engines and other parts of the vessel, improving speed, among others, the U.S. Navy and its industry partners have been working and testing railgun technology at the Naval Surface Warfare Center in Virginia. The Naval Research Lab houses a number of prototype systems the Navy had already developed and built.

Are we to see more of these technology-backed naval offensive facilities in the future?