Spot The Robot Put To The Test Delivering Packages

“Spot”, the robot dog, was originally developed as a potential cargo aid for the U.S. military. It’s a compact quieter version of Boston Dynamic’s “Big Dog”.

After DARPA decided that both Spot and Big Dog weren’t ready for a career in the military, Boston Dynamics has looked for alternative jobs that might be more suitable for Spot and similar robots. That job may be delivering packages directly to your door. Robots With Balance, Dexterity, And Perception
At TED2017’s conference, Boston Dynamics founder and CEO, Marc Raibert cited his company’s focus on balance, dexterity, and perception as key features in their robots. He demonstrated some of those qualities which showed Spot being used to deliver a package directly to someone’s door.

Competitive Capabilities For Package Delivery
Spot’s ability to navigate varied terrain, retain balance when traveling up steep surfaces, and correct itself upon stumbling, are all assets when it comes to navigating city sidewalks, staircases, and entryways in a range of weather conditions.

Spot’s added cargo capabilities, which include a weight capacity of 40 pounds, might make it a competitive candidate for autonomous package delivery. Some robotics developers have touted the benefits of keeping delivery drones grounded to avoid approval processes with the FAA and flight issues in urban and wooded areas. Spot could be a good fit to bypass those obstacles. 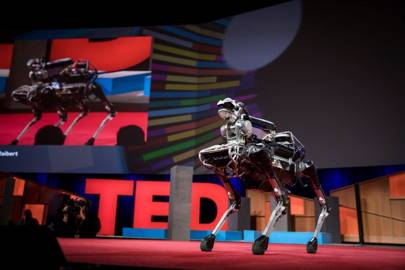 About 70 Percent There
Spot was recently put to the test in Boston by delivering parcels to the front doors of Boston Dynamic employees. Raibert said that Spot had achieved about a 70 percent success rate in navigating varied routes and entryways and safely getting packages where they needed to go.

Showcased in the same conference, another four-legged robot dubbed the SpotMini could also potentially function in a lighter delivery capacity. The addition of an arm and gripper enables the robot to retrieve and place objects with a fair level of dexterity. SpotMini can also use its arm to quickly right itself when knocked over.

Would you be happy to accept door-to-door delivery of goods from a four legged robot? Share your thoughts in the comments.