How has the automotive manufacturing affected automation and robotics?

The resurgence of automotive manufacturing has buoyed the demand for global automation and robotics.

Why Manufacturers Decide To Reshore Back To The US
Millions of jobs in the manufacturing sector have been outsourced since the 1980s in a bid to bring down the costs on labor and maintain competitiveness in the ever-changing and volatile economy. This approach had succeeded in minimizing costs, but it also reduced the number of middle-income jobs in developed markets.  With outsourcing, manufacturers had to face problems for outsourcing companies that are operating in regions where economic and political stability are major issues.

Automation Using Industrial Robots On Production Floor
This overseas reality has prompted domestic automakers to consider using industrial robots on their production floors. Since late 1990s, there had been a significant increase in the number of operational industrial robots globally.

Demand For Industrial Robotics By Manufacturers
In 2012, the International Federation of Robotics made a study of the global robotics market which showed that around 1.15 million industrial robots were in operation at the end of 2011 and the number is expected to increase by 38% (1.58 million) by the end of 2015. This clearly showed the continuous demand for industrial robots in the manufacturing front.

Factors That Boost Global Robotics Market
Currently, the demand for industrial and service robotics is attributed to:

Domestic Automakers And More Functional Robots
With automakers like General Motors and Ford showing stable signs of recovery, the demand for industrial robots remained high as evidenced by the sales of robot makers Fanuc, ABB, KUKA and Yaskawa. Another factor that has boosted the sales of industrial robots is the increase in the number of functions a robot is made to perform. With a robot that is able to do multiple tasks including fastening of nuts, bolts, rivets and steel through hard washers efficiently while checking the tightness at each joint, manufacturing costs will be greatly reduced. 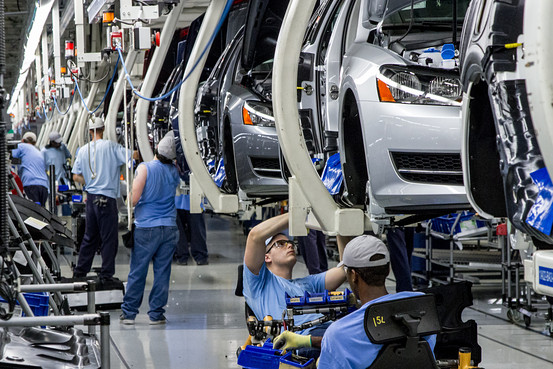 Industrial robots have taken over a number of jobs performed by human workers in the production line.

Increased Global Demand For Industrial Robotics
There is no question that a key user of industrial robotics is the automotive industry. The United States plays second to Japan in terms of deploying industrial robots, the majority of which are found in the automotive sector. For the period 2011 – 2013, the number of robots sold to automotive OEMs in North America based on the data provided by the Robotics Industries Federation has increased by 74%. For the same period, automotive component suppliers also showed an increased demand in robotic acquisition.

Major Players In Auto Manufacturing
At present, the major players in automotive manufacturing markets are:

Challenging Years For the Global Auto Industry
Industry experts project a challenging period for the global automotive industry up to year 2024 as all industry players and other members of the ecosystem have to address the different issues that are currently shaping the industry’s future, including rising consumer trends, new safety regulations and stricter emission policies and requirements. Despite these mega trends, auto manufacturers are still expected to continue to rely on flexible automation and robotics in order to meet the increasing consumer demand.

Will this signal a challenge to the robotics industry to develop more industrial robots that specifically cater to the complex requirements of the automotive manufacturers?

I watched a 60 Minutes report about this subject. The report focused on a car factory that is using robots in its assembly line. The reporter asked the plant’s manager if robots are taking away jobs from assembly line workers, to which he replied, “no. He went on to explain that the robots are assigned repetitive tasks which the robots can execute faster and without error, but the robots still need to be managed and maintained and that is the job of humans. His point was that robots do the menial work faster, but humans still operate the assembly line.