Will the US Navy finally have a better littoral combat ship line that can stand up in a fight against a growing Chinese or Russian navy?

The Pentagon had recently given the green lights for the construction of a modified version of the controversial littoral combat ship line for the US Navy with the addition of over-the-horizon anti-ship missiles, upgrades on air defense and increased armor.

Pentagon has recently approved construction of a modified LCS version for the US Navy’s requirement of small surface combatants.

Small Surface Combatant For The Navy
The Navy’s recommendation for the small surface combatant (SSC) design to be based on existing littoral combat ship (LCS) has been accepted by US Secretary of Defense Chuck Hagel. This means that the Navy will have what they needed – the 52 small surface combatants envisioned for the littoral line, to do their job. Currently, the Navy has about 32 SSCs, according to Adm. Jonathan Greenert, Chief of Naval Operations. The 52 ships will make up nearly one-fifth of the US fleet.

Improved Ship Lethality And Survivability
Improvements are expected from the new small surface combatants, particularly in survivability and ship lethality. The new ships are to deliver enhanced naval combat performance at an affordable price.

LCS Variants From Lockheed And Austal
According to Sean Stackley, Navy acquisition chief, the Navy plans to continue with the procurement of modified versions of both the LCS variants from Lockheed Martin Freedom-class and the Austal USA’s Independence-class ship as permitted by Secretary Hagel’s memo to the Navy “to procure a small surface combatant based on an “upgraded Flight 0+ LCS”. Lockheed Martin’s Freedom LCS and Austal USA’s Independence are the two LCS variants wherein which the modified design of the new SSCs will be based.

Operability Features
These vessels are considered low-cost, light warships that have the operability in coastal waters, depending on their mission, to:

Designs For Enhanced Version Of Littoral Combat Ships
Both Lockheed Martin and Austal USA submitted SSC proposals based on the enhanced versions of their LCS line designs. Both companies commit to incorporate improvements and design changes in time to meet the 2019 deadline set by Pentagon and are prepared to incorporate such improvements into existing and future LCS ships.

The two companies submitted several versions of their designs, ultimately offering the Navy a range of options that include installation of 76mm guns, sensors, advanced combat systems, and vertical launch systems (VLS). However, the proposed version selected by the Navy did not have those features. Instead, the modified design version retained the existing 57mm gun, an upgraded 3-D radar system, and without the VLS. 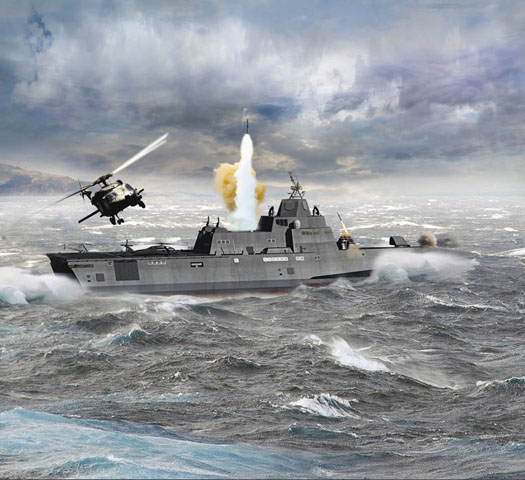 The Navy chose a modified version of the LCS minus the vertical launch system (VLS).

Improved decoy systems will divert incoming enemy missions. The new ship will also have an upgrade to SeaRAM, a missile-interceptor ship defense system. It will also have the configuration of improved signature management which means having the technologies that will reduce its susceptibility to being hit by enemy weapons, reduce the ship’s signature against mine threats, and make the vessel less detectable to enemy radar.

Lowest-Cost Option
Stackley said that this is the lowest-cost option that would allow the Navy to make use of the investments already made in the LCS. The additional capability would cost the Pentagon around $60 to $75 million more than the $360 million cost per vessel. Cost consideration is definitely highlighted in Hagel’s memo.

Anti-Submarine Warfare Or Surface Warfare Functionality
A degree of modularity on the designs allows the fleet to determine if a ship should focus on anti-submarine warfare (ASW) or surface warfare (SUW). The ASW-configured SSCs will operate with variable depth sonar and helicopter anti-sub weapons including the 30mm guns secured in place by the versatile 302 stainless steel shims , two 11-meter rigid hull inflatable boats, ship-launched Hellfire missiles, which are all features found on existing LCS mission packages.

Adjusting To Future Needs
Eric Wertheim, Naval author and analyst said that the changes will likely quiet critics even if the ships still don’t have the defensive weapons of bigger ships. He said the ships are adjusting to more of what the future fight are deemed or expected to be.

The new version will be produced no later than Fiscal Year 2019 and Hagel specifically instructs that there will be no gap between production of the last traditional littoral ship and the first modified version.

Do you think the Navy’s modified LCS versions will surpass enemy warships’ capabilities?

I find the term, “Improved Ship Lethality And Survivability to be very telling. It sounds as if the Department of Defense is preparing for a coming war that looms over the horizon. I’m not referring to Iraq. I believe that war is pretty much behind the U.S.. I’m talking about a war that is of apocalyptic magnitude. The way the military is preparing and developing weapons indicates that they are anticipating an army the likes of which the world has never seen.

The descriptions of these future vessels are quite incredible. The Navy is surging forward with plans to build a new, more lethal Littoral Combat Ship variant engineered with a host of new technologies, weapons and systems to begin procurement by 2019, so say service leaders. You just never know what changes are on the horizon on Capitol Hill, but It is a safe bet to assume that lots of resources will be going to the defense budget.